The New Territories Concern Group was founded on the 4th May 2013. It was established with the aim of monitoring the Government’s various policies in relation to the New Territories. Learn more via http://www.ntconcerngp.com/aboutus/aboutus.php

While they did not initially have a strong interest in waste management they have become active in this area. They released a “Report on Waste Management” dated 23 Nov 2013 that provides an alternative technology approach (called plasma gasification) to the technology being promoted by the HK Government. We encourage people to read the report available via http://www.ntconcerngp.com/files/files/Report_on_Waste_Management_eng.pdf 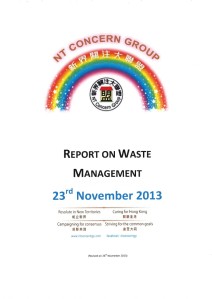